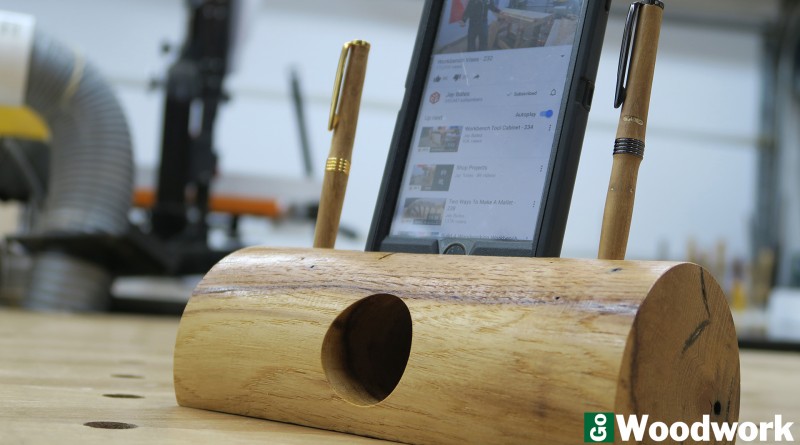 Several weeks ago I spent some time with Jay Bates in his shop. Aside from lots of goofing off, we did manage to knock out several projects.

Often I use my phone as a music player but hate having to deal with Bluetooth if I only want to listen for a short time. I’ve seen many people create their own version of a speaker amplifier but I wanted it to be simple, yet functional. The original idea was a “pill” shape and use some speaker mesh to give it the appearance of the Beats line but this beautiful piece of hickory was no candidate for paint. 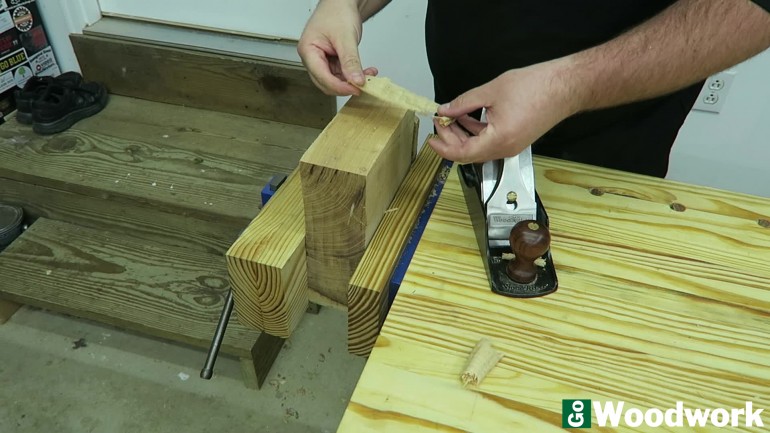 It wasn’t really necessary but I wanted to see how well a plane would handle this credulously hard hickory, it scoffed at the task. 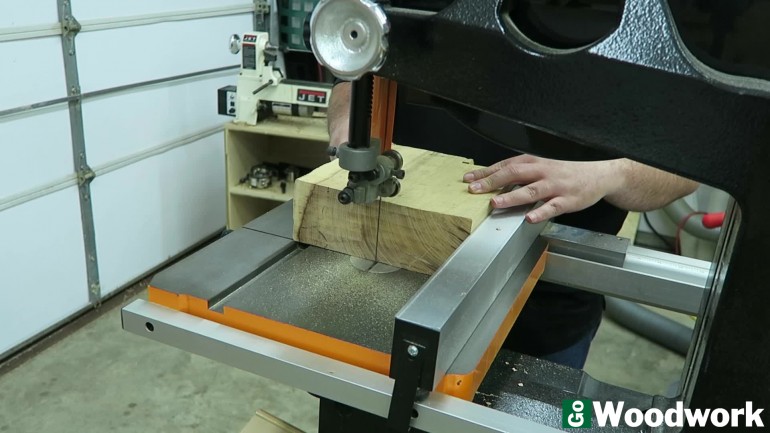 This piece was just barely too wide to fit the jointer so I cut it down to a rough size. This left a nice chunk of wood left just screaming to be turned into a mallet. 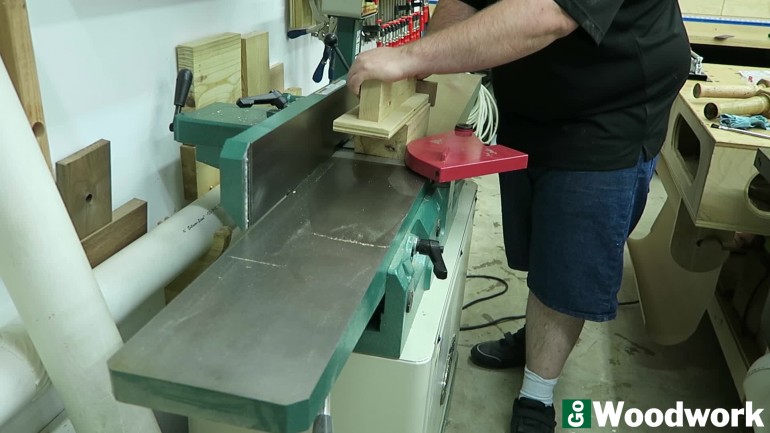 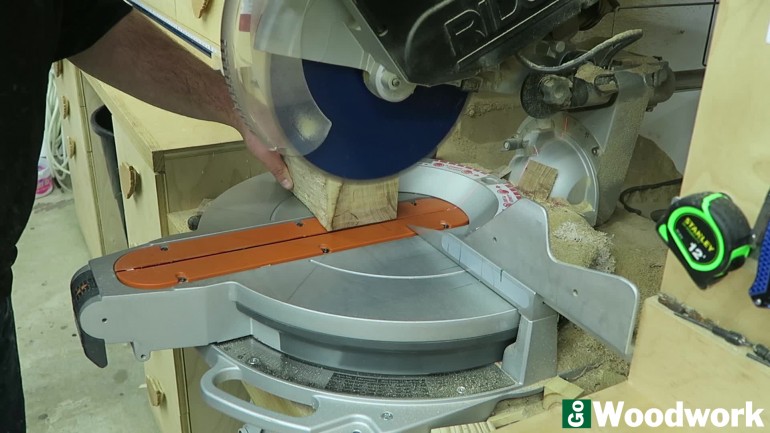 Using the USS Enterprise, I joined two surfaces parallel so it would be easier to accomplish squaring the ends. 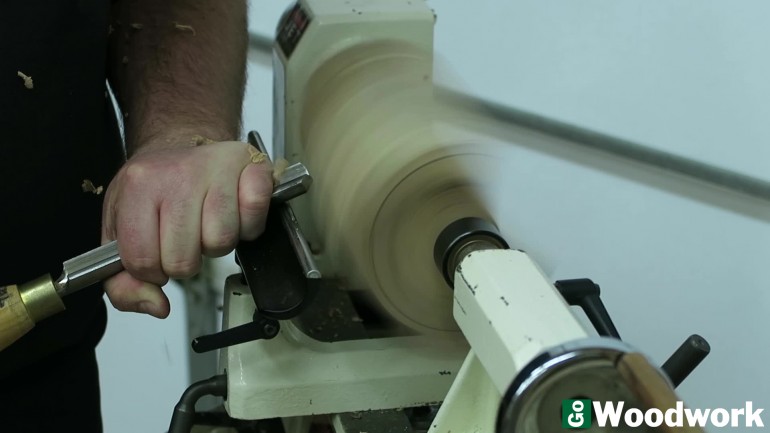 I used calipers to measure the maximum radius and drawn a pencil line and then turned the piece down to the pencil line. Using off-center mounting left a nice flat bottom but it did create a ton of vibration. 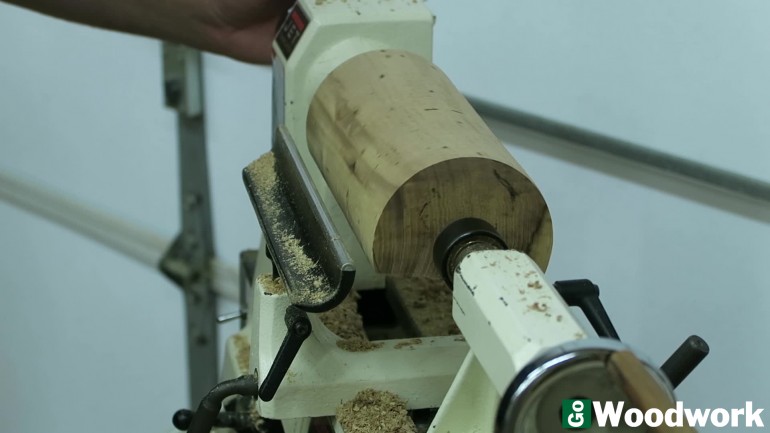 This piece of hickory was beautiful and was pretty painless to turn. In all, it was about 15 minutes to turn it from the block down to the final shape. 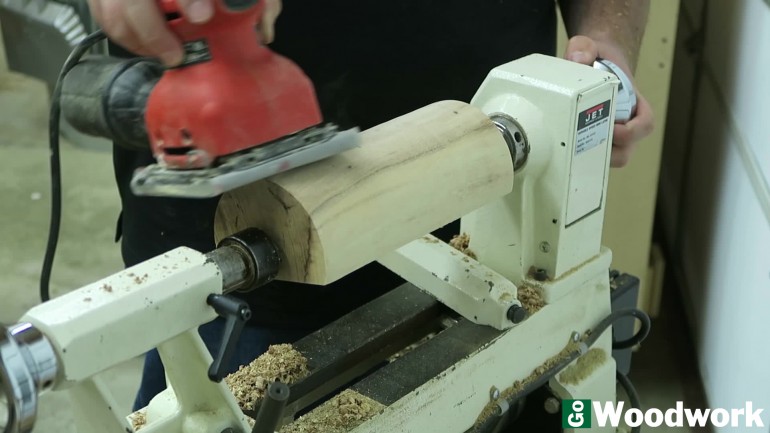 Given the odd shape, the majority of the sanding was done while still mounted to the lathe. Finally a use for the 1/4 sheet palm sander; I don’t believe I’ve used one for years. 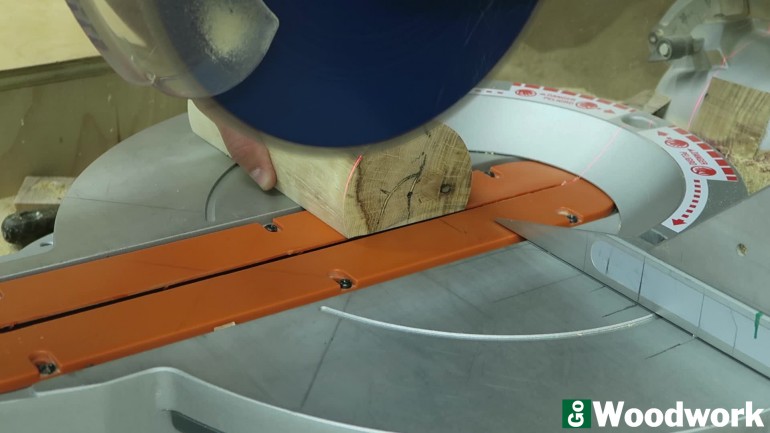 Both ends were sliced off to remove the divots from being mounted on the lathe. 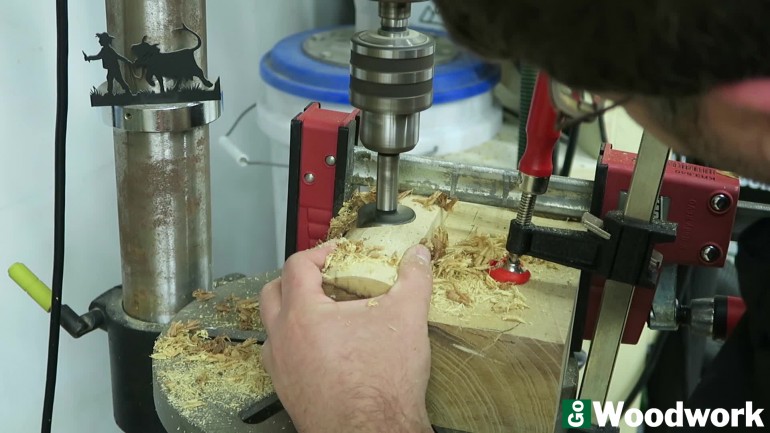 The speaker hole was drilled using 1-1/4″ bit and it stopped approximately 1/4″ from the back. 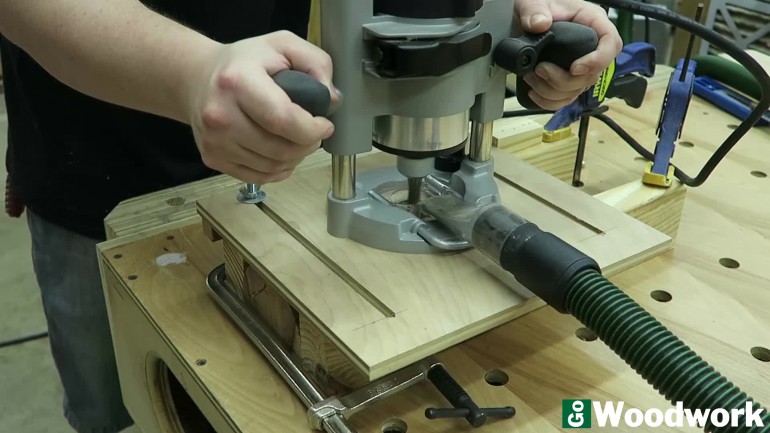 The hole for the phone was done with a 1/2″ router bit. As I wasn’t familiar with his router, he cut the slot. 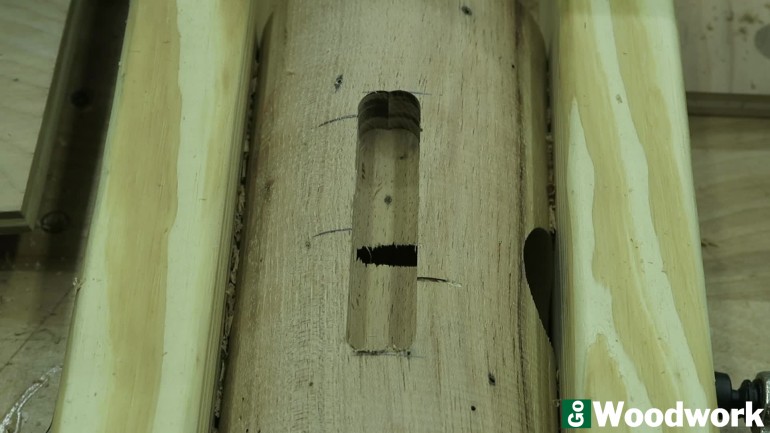 Success, the holes are meeting! 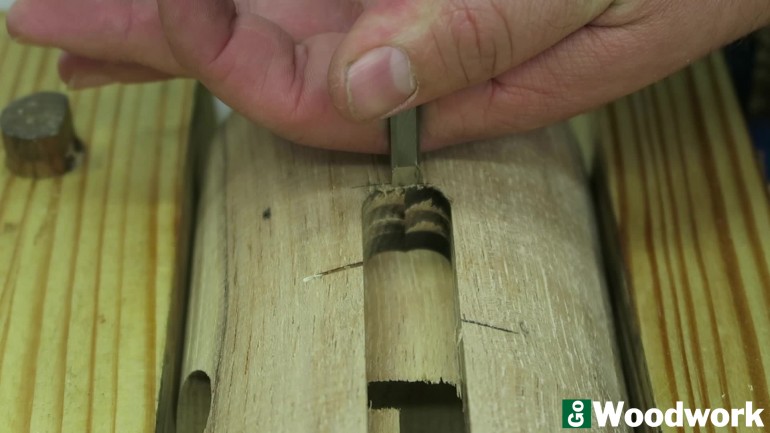 Rounding the holes as well as further elongating the opening for the sound cavity was done with chisels, several different files, and a rasp. 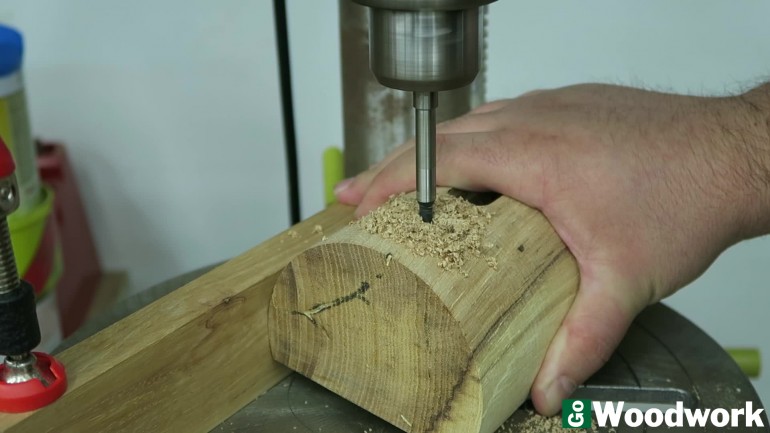 After a bit of thought, it looked a bit plain with just a hole in the middle. I decided to drill holes on each side to accept a turned pen from the same chunk of hickory. 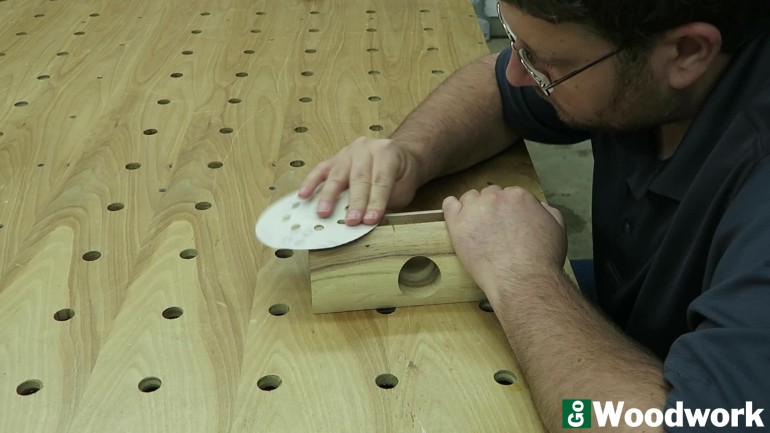 More sanding to get rid of pencil marks, any sharp edges and to clean up from the holes and slots I drilled. 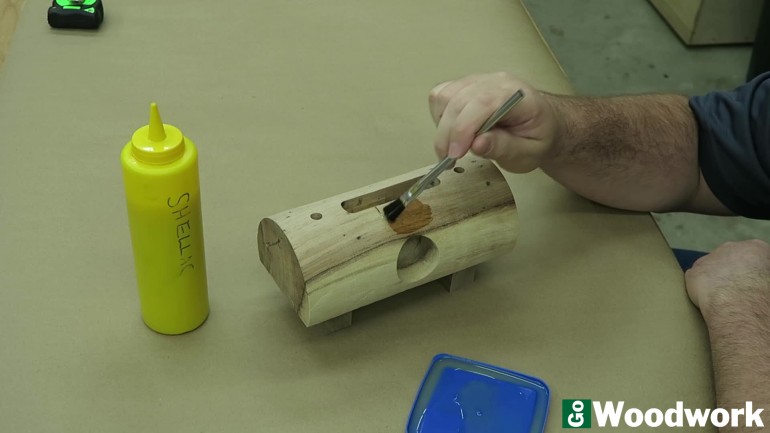 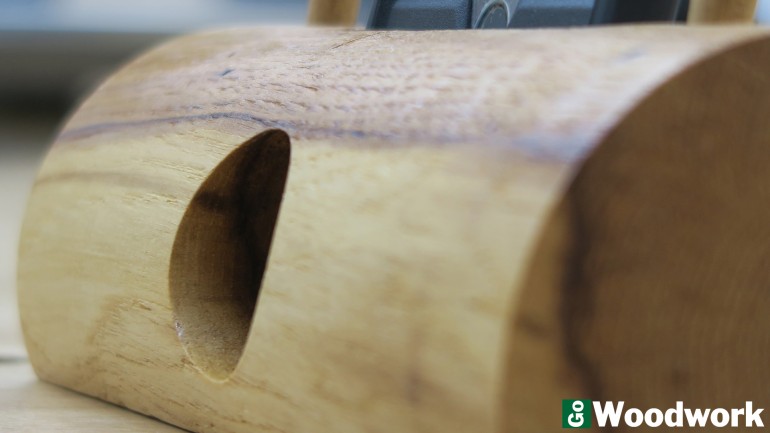 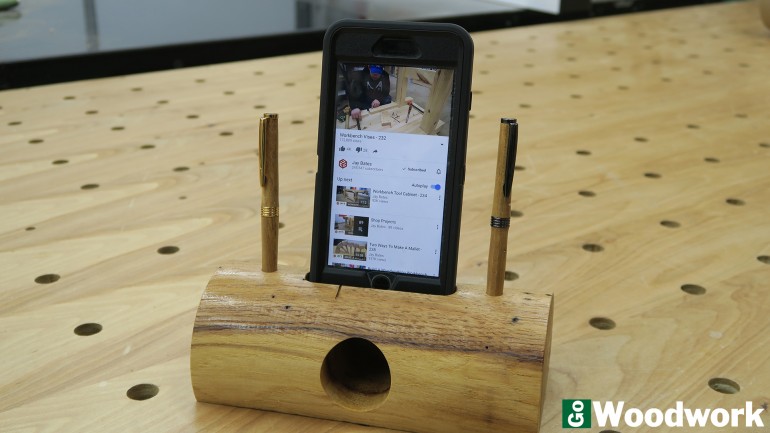 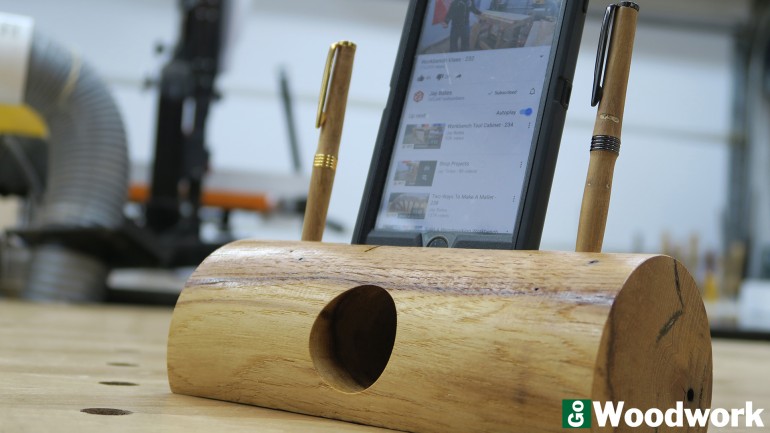