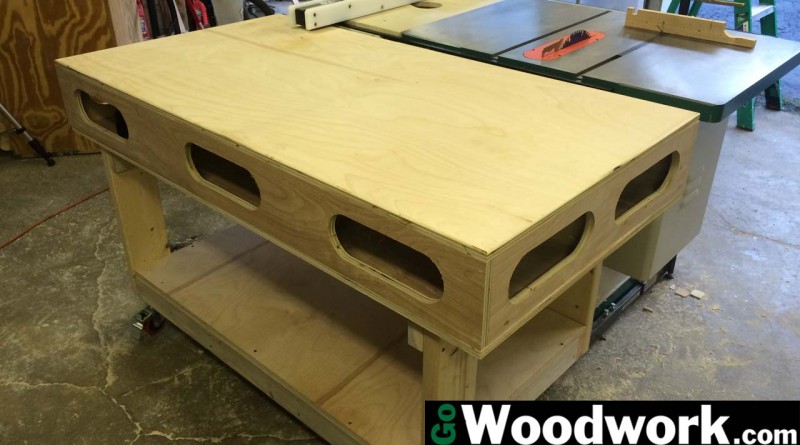 Having seen both the original Ron Paulk torsion box workbench and Jay Bates create his own version, I decided that this would be the perfect project to go with my new-to-me Grizzly table saw.

This project took about 1 1/2 sheets of plywood. I chose Purebond upon recommendation of a friend and I have to say, I’m quite impressed. I found no voids even in the middle of the two sheets. I can get the 1-side primed plywood from Lowes and drive about 7 miles round-trip but rather I chose to travel 72 miles round-trip to the nearest Home Depot to get Purebond. They are a US company and there is no formaldehyde in the wood but rather soy-based resins. With the huge fiasco of Chinese plywood, sheetrock, and now flooring all “supposedly” being CARB-2 compliant but none of it was, the extra drive and increased cost was piece-of-mind enough for me and valuable.

I began by ripping the plywood to 32″ wide. I’ll be extremely glad when the outfeed portion of this table is done because handling full sheets unsupported is not only difficult but extremely dangerous. 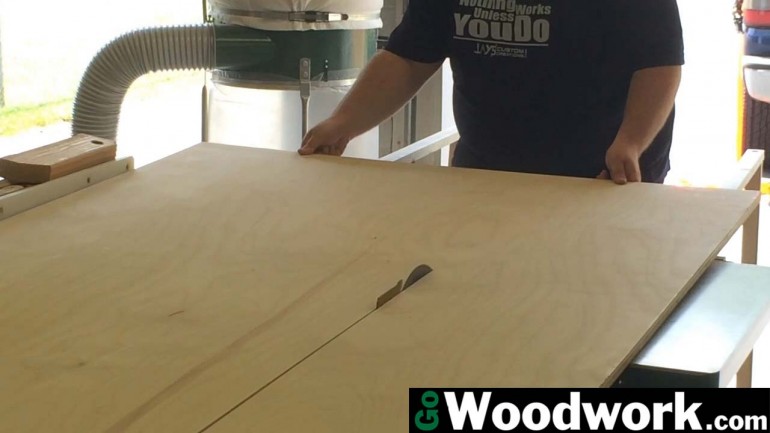 Not having 8′ of clearance to cross-cut an entire sheet, I used the circular saw sled to cross-cut the sheets to 60″ long. 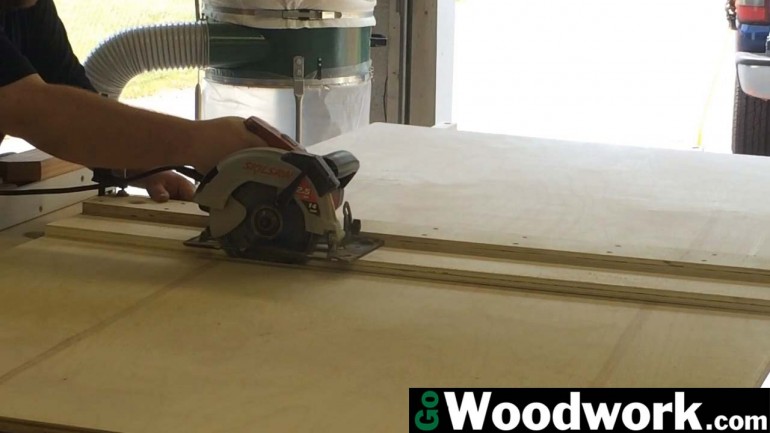 I moved the fence to 7″ to cut the four sides and interior dividers for the torsion box. 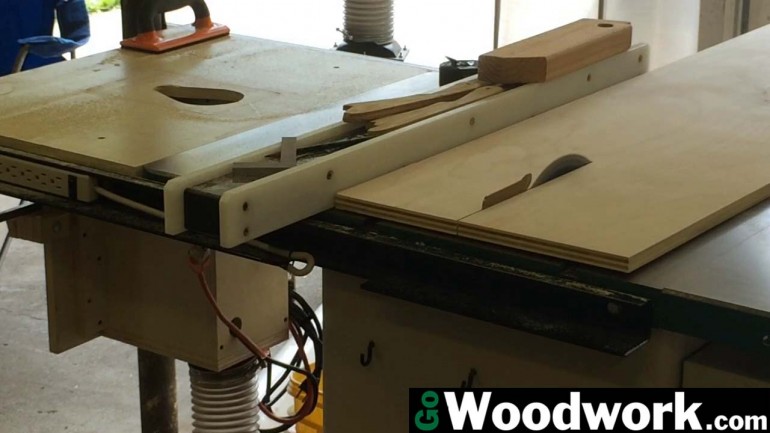 The shorter lengths were able to be cross-cut using the miter gauge after roughing them down with the miter saw. 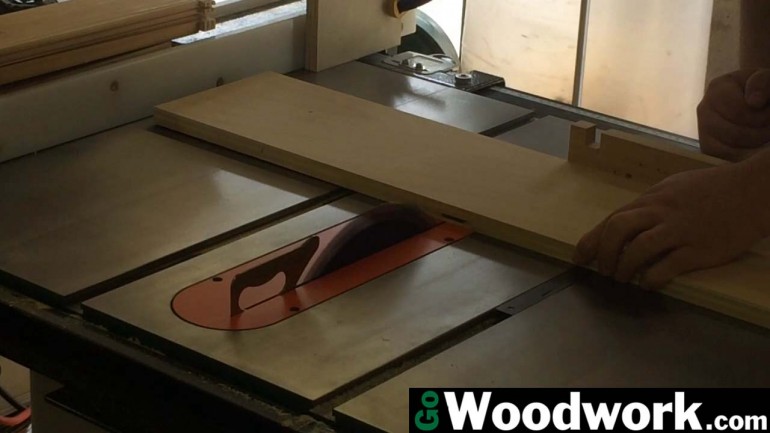 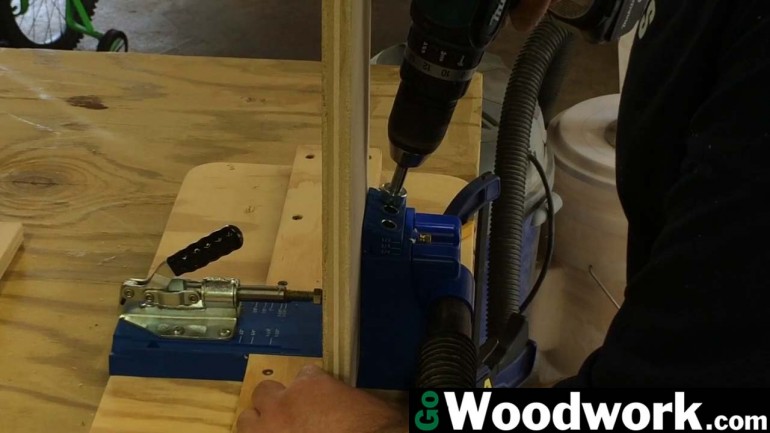 Although it took about 45 minutes to get it perfect, I created a pattern to use with my plunge router and a flush-trim bit to cut all of the access holes. The openings are 4″ tall and just shy of 12″ wide. I ensured my cordless drill and impact driver were able to fit before I started cutting. Due to the piece of wood I used for the pattern being difficult to clamp, I used 1″ screws and attached it to the inside of plywood because once it is assembled, the holes will not be seen. 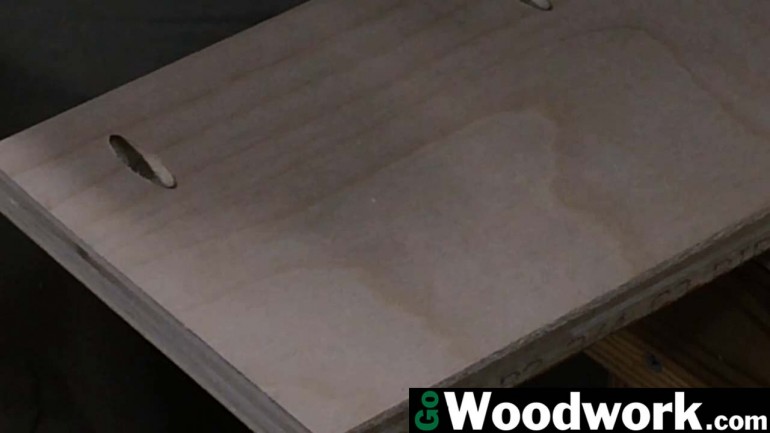 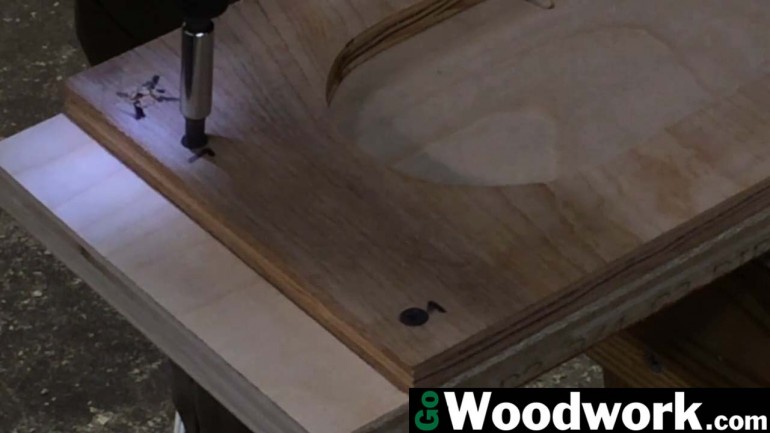 To provide access for the bit, I cut a 1″ hole so there would be plenty of room for the bit to spin-up without hindrance.

A spiral bit and a bushing would have been more ideal but I had neither but the Bosch bit had no trouble handling the job. 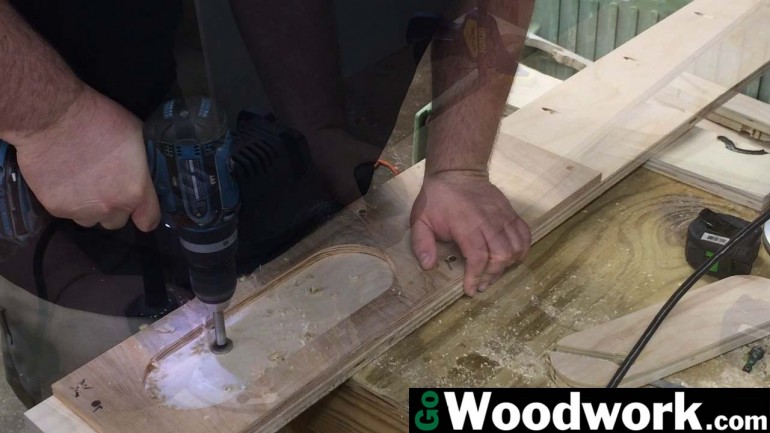 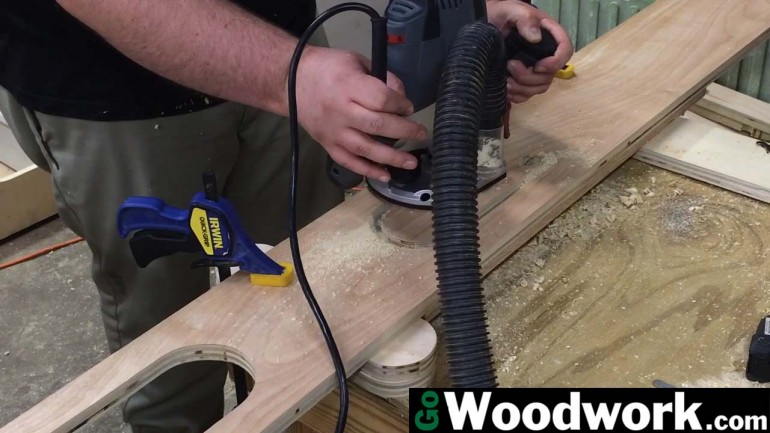 The entire torsion box is held together using glue and pocket hole screws. 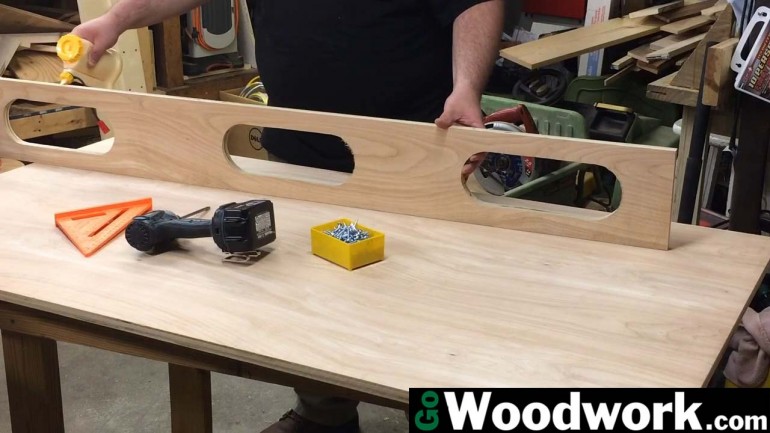 Pre-loading the pocket holes with screws really speeds up the process once glue has entered the game. 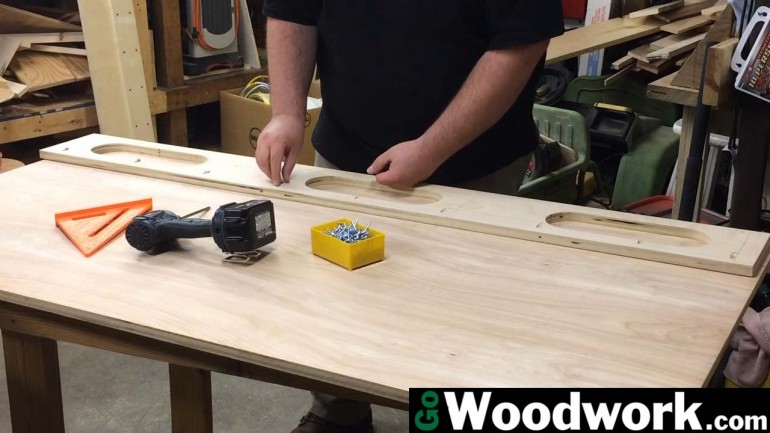 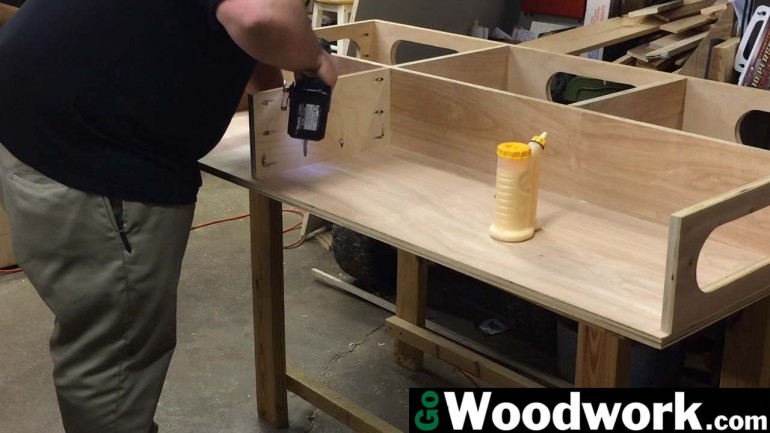 The remainder of the center torsion box supports are added.

The bottom of the able is added using 1 3/4″ screws. When flipped over, the good side of the table is clear of all hardware since pocket hole screws were used 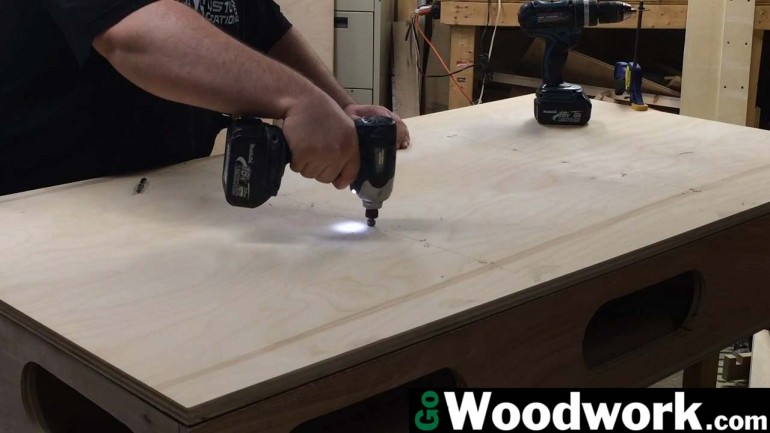 The frame is made out of 2×4 and 2×6 construction material. Rough cuts were done on the miter saw with the final lengths cut using the cross-cut sled. 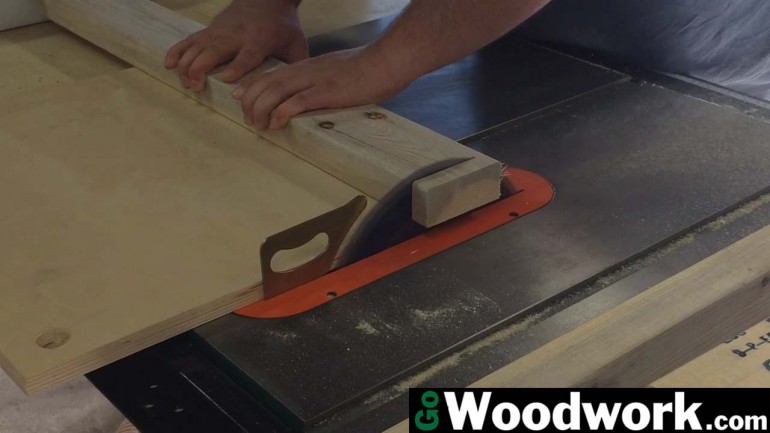 A notch on the back two legs was made to create a shelf for the 2×4 cross brace to rest on. The notch really helps strengthen what normally would have been just mechanically fastened using a few screws. 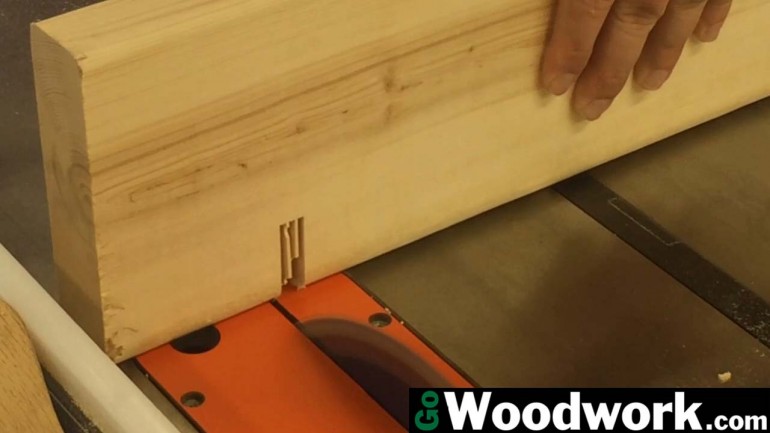 A large quantity of screws were used on 2×6 connections when available. Since this table needs to remain straight and true, I wanted maximum rigidity. 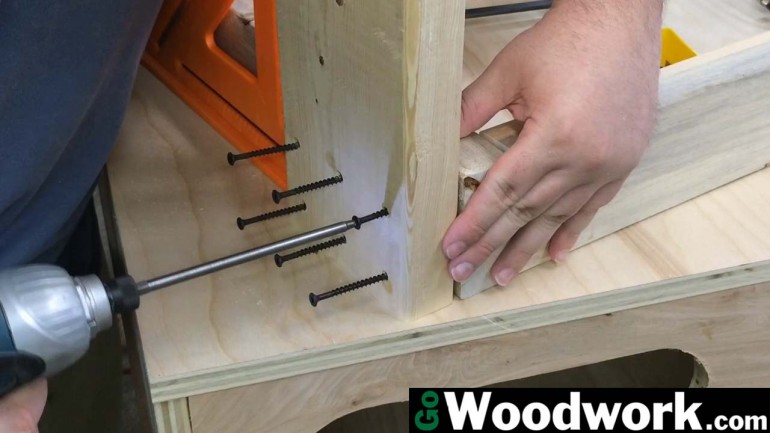 The base was then flipped and high-quality casters were added. I ended up using 2 1/2″ blue-coat screws with a #10 washer since I didn’t have anything really better to use. Surprisingly these worked very well and I’ve picked up a box of #10 washers to use like this in the future. 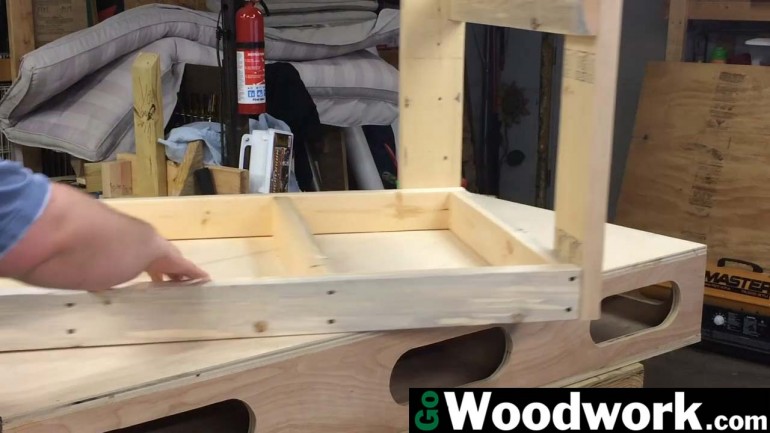 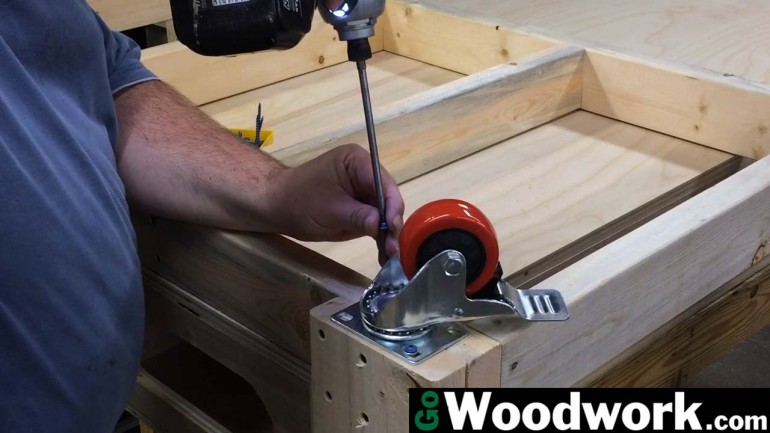 The top is secured to the base using 3″ decking screws. Since the table will almost never have any forces against it aside from downward pressure, this is more than enough to handle the task. 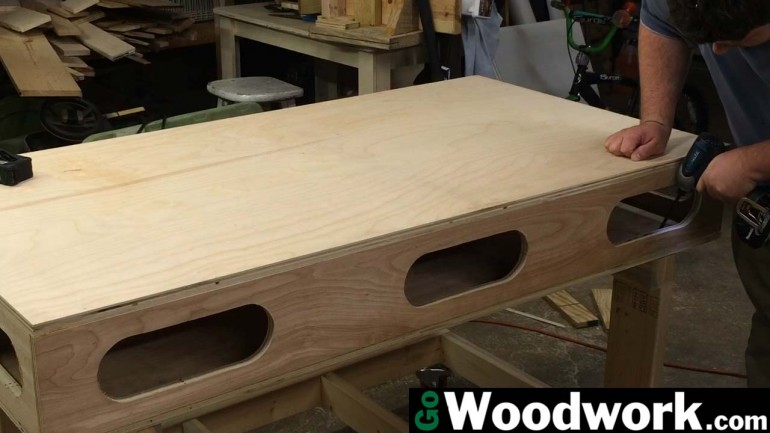 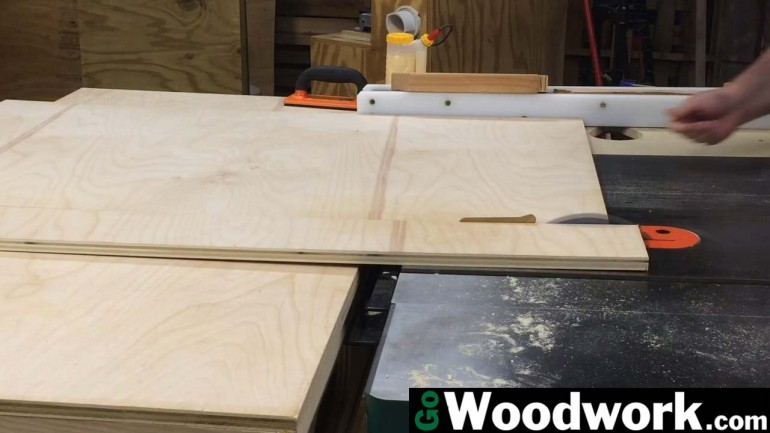 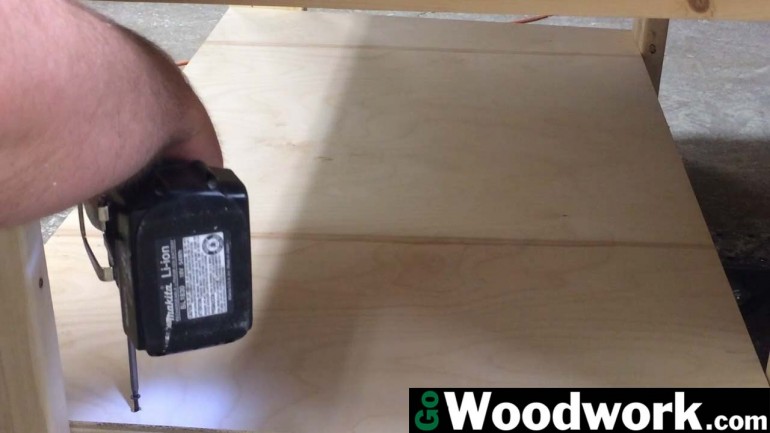 To take off the rough edges, I hit the top with a 1/4″ roundover bit. 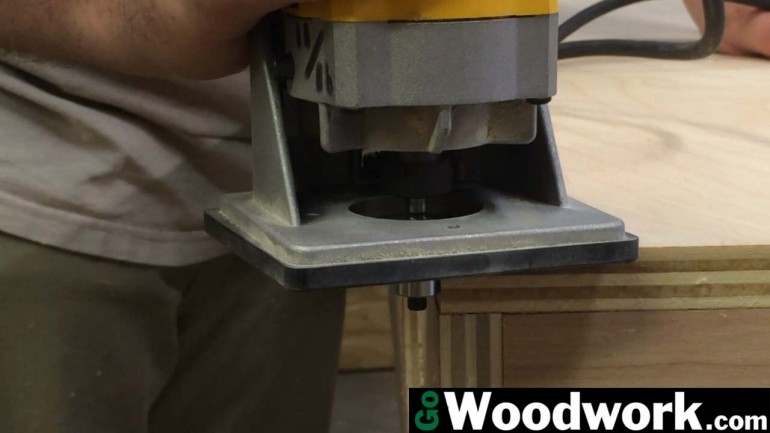 I’m extremely happy how this project turned out and foresee many years of use! 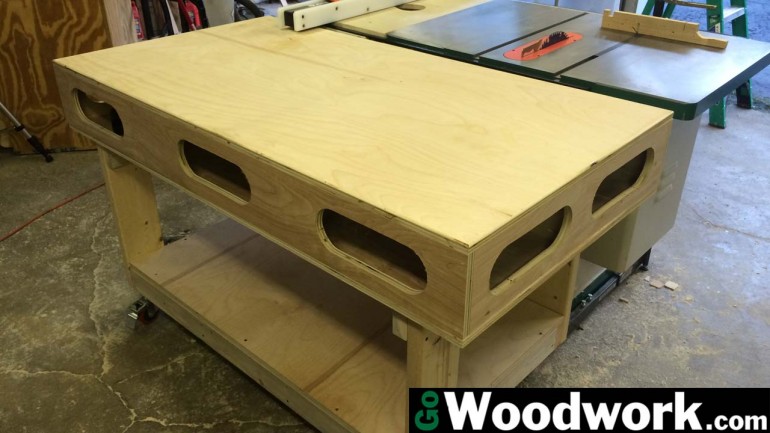 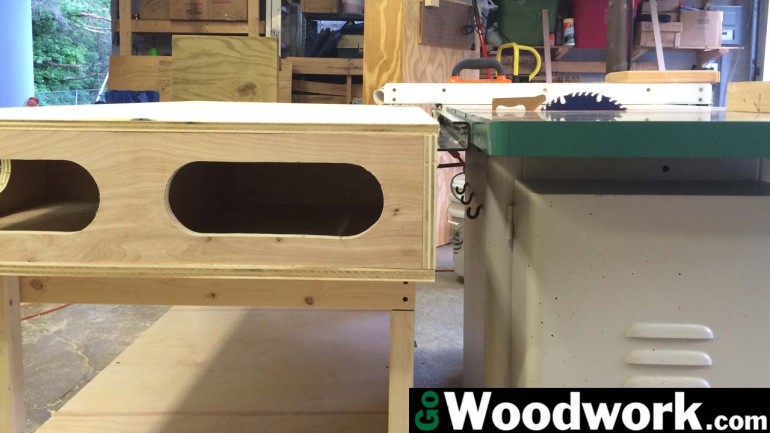 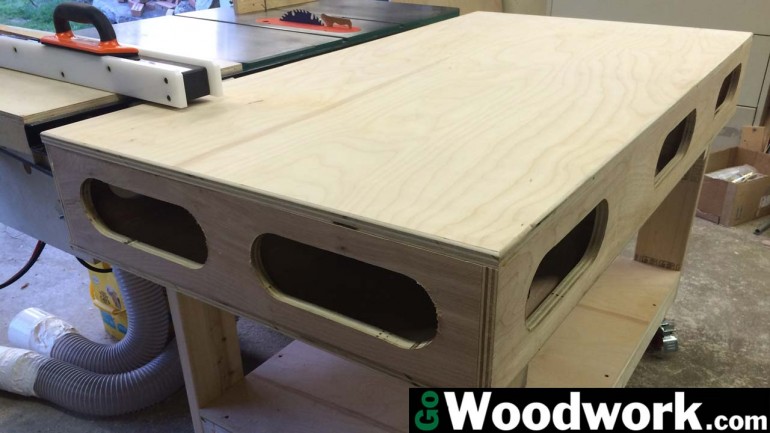